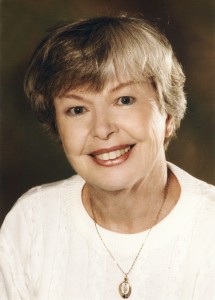 Beatrice L. Wallace was born in the Thumb of Michigan and attended Leslie School through eighth grade by walking one and one-half miles to the one-room schoolhouse sitting on land donated by her family. She was active in 4-H and graduated with honors from Cass City High School. Working as a secretary for six years developed her skills in office procedures and working with the public. She married her high school beau, Bob Wallace, in 1959.

The Wallaces moved to Hemlock, Michigan, where Bob began teaching and coaching. After their first daughter, Julie, was born, Bea attended Central Michigan University and obtained a teaching degree with a major in English and a minor in Sociology, again graduating with honors. A second daughter, Leslie, and a Master’s Degree in Library Science soon followed. Bea taught English and was librarian for Hemlock High School, serving as library supervisor until retiring in 1995. Who’s Who in American Women in Education recognized her accomplishments. She has also published many articles on Haflingers and their owners. 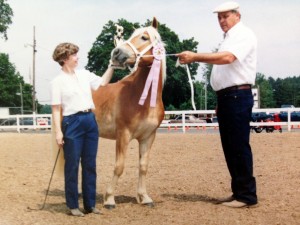 Haflingers became a part of the Wallaces’ lives after a trip to Tempel Farms in 1978. They were instrumental in forming the Great Lakes Haflinger Association in 1986, and in 1987 purchased the Haflinger Association of America (HAA,) the original Haflinger breed registry. They operated it as a service for Haflinger owners in North America until 1998 when HAA became a part of the American Haflinger Registry (AHR.) Bea Wallace has served as a consultant to the AHR and Bob Wallace has served on the Board of Directors since its beginning.

In addition to Haflinger activities, the Wallace’s now keep busy enjoying their family, Julie, and Leslie, her husband Scott Merchant, and a special delight of three grandchildren, Alexandrea (Lexi,) Tristan, and Chloeana (Chloe.) Other interests include antiquing and reading. The Wallace’s find retirement far too busy and have just renewed an interest in golfing after a thirty-year hiatus.